I don’t know why but this BFN is hitting me harder than after my last cycle of IVF. Maybe because I had so much more hope this time. Last night we were at family dinner with my parents, sister/BIL, and my nephews. Ian the 2 yo was doing something and kicked me really hard and I SNAPPED at him. I never do that, ever. I felt like shit afterwards. On Friday someone at work asked me how I was doing and I just burst into tears and ran out of the room. I am soooo embarrassed.

We had our WTF last week and my RE said it was just bad luck and he can’t see any reason this didn’t work. He said he was confident we’d be pregnant soon. But we are waiting til January to try again. The holidays are going to be busy and hopefully we will be able to enjoy them.

I haven’t written much about my sister and how she handled the cycle. Truth be told she was a rock star. While she was on the stims she was mostly just tired. Even though she produced 25 eggs for us, she was up and running the day after retrieval (so was I but I only produced 7). She handled it so well and gave such good results that she was asked so donate again as an anonymous donor. After the holidays she is set to do this all again, for someone else.

Here’s the deal, I haven’t told her about the negative, though I’m sure she heard about it from our mom. I’m kind of nervous to see her. I feel like we were in a relay and she did such a good job for her leg of the race while I totally fell apart on mine. I feel like I let the team down. I’m trying to work up the nerve to go next door and see her but I keep chickening out. But I owe it to her to tell her in person, wish me luck.

“We are the inheritors of a wonderful world, a beautiful world, full of life and mystery, goodness and pain. But likewise we are children of an indifferent universe. We break our own hearts imposing our moral order on what is, by nature, a wide web of chaos. It is a hopeless task”

Well I am never doing that again. EVER. Next time I’m just going to wait for the blood test. That is if I can bring myself to put us through this again.

You might ask, what do those 2 things have in common? They are the 2 things I’m most afraid of in this world. I think my fear of spiders is obvious (nasty unnatural creatures straight from hell) and pee sticks? Well let’s just say they haven’t been kind to me.

When I was a fresh faced TTCer I tested early often. Some cycles (as in the cycles I actually ovulated) I would get wicked progesterone symptoms that mimicked pregnancy and I would think “this is it, Im pregnant” and I would pee on a stick. And it would be negative, every time. Then the next day all my symptoms would go away. For awhile I thought it meant the symptoms were all in my head but I later realized my symptoms faded naturally a day or so before my period. It also made me feel on some level that the negative pee sticks caused me to not be pregnant. That the act of peeing on a stick made the symptoms (and therefore my pregnancy) disappear. Yea I know it sounds nuts. And each negative stick made it harder and harder to pee on the next one.

I am terrified of tomorrow. The day I designated to pee on a stick. The day before my beta. The hubs and I wanted to be able to spend the day together and process the results together. We can find out on our own terms, not on someone else’s and then return to work Monday when the information won’t be so raw.

Sounds like a good plan, right? Well here’s the catch. I don’t want to test anymore. I’m too chicken, too much rides on the results. I actually still feel pregnant. I don’t want to pee on a stick and jinx myself into a negative result. I think the only way I managed to test last IVF cycle was because my symptoms were gone and I had started to spot.

Hopefully tomorrow I wont chicken out and I’ll be able to post my first ever positive pee stick. Fingers crossed.

I’ve got 9 in the bank, the other 3 stopped growing. I feel strangely sad about this, I should just be grateful for the 10 embryos we got (2 more than I had calculated on and wayyy better than our first) But I am sad, the more embryos in the bank the better, they made me feel safe. Logically the quality of those embryos would have always been suspect if they had made it to freeze since they were slow in developing. I am grateful of the 9 on ice though, I can’t believe we have been so fortunate. I have a 50/50 chance here and I have never had that high of a chance before. This is it!!!

Today was our transfer day. We decided to go with a single embryo this time because we made it to a day 5 transfer. Plus apparently donor cycles have an even higher chance of multiples (50% vs 40%). We’d like a calm peaceful singleton pregnancy if possible. We also found out we still had 13 embryos left 10 excellent quality blasts and 3 morulas. So we will freeze 9 today and keep an eye on the other 3.

The transfer also took much less time, last time they took an hour and a half to get the catheter in, not including the break we took to fill my bladder more. This time they grabbed my cervix and pulled it straight (they numbed me first, but yea that hurt) and the catheter went right in. Then they put in my blast (who I have decided is a boy apparently as I called it a him).

Then I scarfed a Carl’s jr turkey burger that I was craving so bad (which is strange since I almost never eat meat) and curled up with my lazy beagle. I slept so hard I ended up drooling on her. 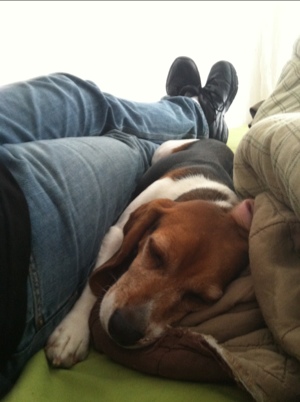 Willow is in lazy beagle heaven. 3 whole days of bed rest! Ps those aren’t my crazy long legs, they are the hubs. He took the day off to wait on me hand and foot. So spoiled!

A universe where we get good news, not the bad we have learned to expect. As of this moment we have 17 embryos, all dividing and growing right on schedule. Yes that is not a typo, 17. There were 25 eggs, 18 mature, and my husbands super sperm got 17 knocked up. Our day 5 transfer is scheduled for Wednesday. I am now positive that I will someday be come a mom. The odds have just dramatically changed in our favor. I still can’t believe I am writing this, do we really deserve such good fortune?

My baby is being conceived today (thanks KayBee)! My sister had her eggs retrieved and my husband left his sample. Right now they are in the same petri dish getting aquatinted. I didn’t want to know the number of eggs, just the number of embryos. Should get that call Sunday.